Abstract
Extant pieces are imperative to the recreation and research of medieval objects because they are literal snapshots of the  moment in time one is trying to better understand and recreate. Along with multiple supporting peer-reviewed and critically-scrutinized sources, they form a firm foundation for artistic and scholarly pursuit. However, skilled scholars should question the museum labelling and in some cases the provenance of an extant piece. In many cases items have been reclassified several times after their discovery, have incomplete or vague provenance, or supporting identifying and background research was unknown at the time of museum display. The Medici Porcelain Cruet for Oil and Vinegar on display at the Museum of Fine Arts, Boston has several of these concerns. The cruet does not resemble the other fifty-six remaining extant pieces of Medici Pottery and its provenance and periodicity were unclear until the research done for this paper. My research has been accepted by the Museum of Fine Arts and added to the cruet’s curatorial file. This paper discusses seeking better understanding of an extant piece’s context beyond its appearance, as well as exploring questions of provenance in the art and science of recreating history. Additionally, it addresses how in-period art was often a copy of and/or inspired by another work, and in the case of the Medici pottery, a direct attempt to copy works from China.

The Curious  Crude Cruet,  an Unexpected Rabbit Hole and an Amazing Journey

In the Summer of 2018 my phone rang with a request that I cover a one week summer program. Being a teacher and mother the thought of the extra income and the chance to travel around the sites of Boston sounded like an amazing opportunity and it was. One one of our day trips the group of teens I was with went to the Museum of Fine Art in Boston. In one small gallery, in a back corner, dimly lit my students stood laughing. I had to see what they were laughing at. It was a Cruet in the shape of a Lady's legs and covered with paintings of fish. It was so different from anything I had seen. I noted it was Medici and snapped a picture . Curious to understand this unique piece.

Almost two years later I am still researching this object and its story. From top secret alchemists trying to copy the work of their counterparts in China to questioning if the object is indeed Medici I continue to find new developments in something very old. In it I found my passion. Ceramic and porcelain objects are often everyday items. Something touched, used and part of the landscape of the daily life of the very people we study. They tell the tales of domestic life and the human need for glorious clutter. You can research the chemistry, composition and science or the objects or the vey tale of its creation and how it came to be in a small glass case. Each object a portal to precise moments in the past.

The body of my work on this piece is below and still continues.

My presented work from Spring 2019 and then my first work from Fall 2018 are below. A new paper with current discoveries on the provenance of the object are coming for the fall of 2019.

The Experiment of Medici Porcelain 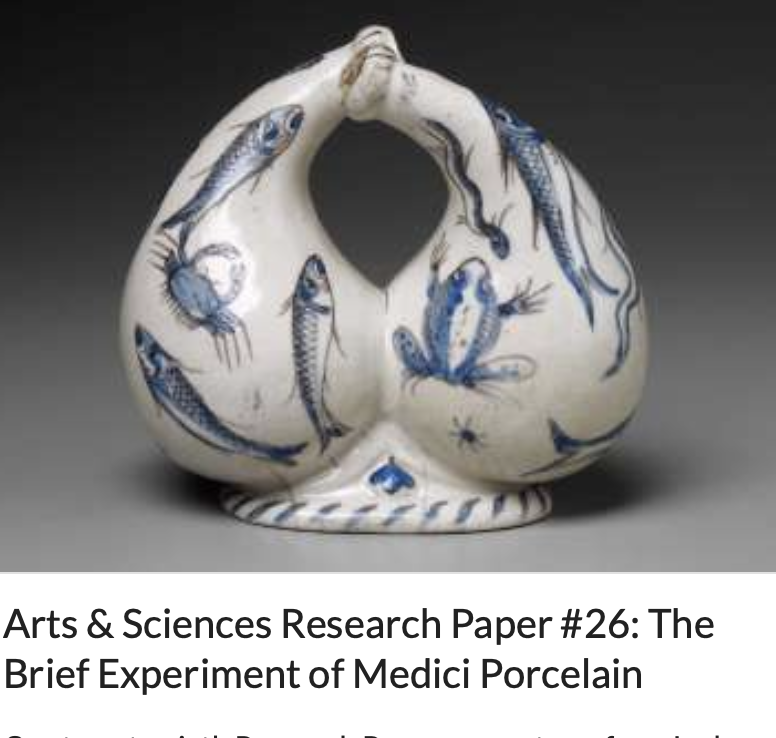 Understanding a Medici Cruet for Oil and Vinegar
Research and Model


Materials
What was used on the original Medici Cruet?
The Cruet for Oil and Vinegar, on display at the Museum of Fine Art Boston was made in the short-lived Medici Porcelain Factory in a response to a demand for pottery from the East. The exact amounts of indigents used are unknown due to trade secrets however we do know it is soft paste porcelain. Soft paste porcelain is not as strong as hard paste due to its composition and low firing temperature. We do know that the clay was a mixture of white clay, kaolin clay, quartz, feldspar and calcium.
The under glaze contained titanium oxide and the distinctive blue patterns were painted with a cobalt based paint. The over glaze is bubbly and cloudy in spots. This was due to great experimentation.


What materials were used for this A & S piece? What was the rational/ were limitations?


Because I DID NOT have access to a kiln, I had to find an air dry clay that used some of if not all of the elements of the original, low fire, soft paste porcelain. I went with a kaolin and natural mineral based air dry clay that COULD be fired if a kiln were accessible. Thus making a “green wear” version of a period piece.
The under glaze is a white titanium oxide gouache and the designs are a cobalt blue, natural mineral based gouache. I chose gouache because it was a period paint and in use at the time.  In researching the original I could not find details on the glazes except to say they were a Medici secret.
I used natural based brushes, created the work on an unfinished wood table and only used hands and a piece of string to create the piece in order to make it as period as possible. The one modern material used was an acrylic glaze to stop chipping and preserve the piece. The correct and period method would have been to fire the piece a second time with a clear glaze.


How was this piece created? What materials were used? What techniques were period ? What modifications had to be made and why.
(please also see photographs of work progression)


1. Inspiration-
In late July I visited the Museum of Fine Art in Boston with a group of ten students aged 12-14. While in the European, Kunstkammer Gallery, I noticed several of my students amused buy a small cruet in the shape of a woman’s legs covered in painted fish and aquatic life. I noticed that this was a late medieval piece and was intrigued by it as well as in awe that something so fragile had survived time. I took multiple pictures and became determined to research it and understand it better.


2.Research-
I researched the piece, its history and composition. Further research was made into the clay, working clay ,clay composition and science, cobalt, gouache paint, Medici Porcelain Factory, kilns and firing of clay and the influence of Asian pottery in the end of the medieval period.


3. Organization and Development of To Do List-
Before working with clay, something I had never done before, I realized that I had to practice copying the art from the cruet. Then I could mold a cruet ( or similar blank), dry it, paint it and glaze it. Finally prepare a display.


4. The Aquatic Art is Practiced
First the fish and other animals were sketched in pencil, then recreated with gouache on cold press paper. Finally, they were enlarged to a size close to the original and painted with cobalt gouache on canvas stretched on a wooden frame.


5.Working in Clay
Because of a lack of kiln, I chose a clay that was comprised of kaolin and other natural minerals that would air dry, but could still be fired if access was made. I worked the clay on an unfinished wood table, adding water as needed. When the clay was malleable I began to shape a hollow cruet. It began to collapsed and crack as it dried. I realized this would not yield a paintable result and that I had no prior clay experience. I opted to make a “blank” that was solid that could display the aquatic art and mimic the rounded shape of the Medici porcelain. I created two blanks using pictures of the original as a guide. Finally, each blank was painted with water to smooth its surface.
6. Drying
A thick, solid clay work can take weeks to dry as was the case with the cruet shaped blanks.  The drying clay was set indoors to dry on a shelf for one week, then outside in direct sun on three separate days. It was then left in a windowsill to air dry on three dry days.  Uneven drying led one of the blanks to crack at bend. This later led to crumbling and its eventually being discarded. Also, drying reduced the size to slightly smaller than the original.


7.Painting
Both blanks, now dried to a white finish were coated with white, titanium based gouache as a base for the aquatic illustrations. This was done in one coat and set to dry for three days on a shelf. Then, cobalt gouache was used. A fine brush was used to outline the fish. The brush was changed and the art was finished around the cruet blank while using pictures and online images as a guide. Because water activated the clay and under coat it was all set to dry for one week before being handled.


8. Glazing
Chipping began at the base of the one remaining blank. It was at this time I realized I would have to use a modern air dry glaze. I chose a clear acrylic glaze tha would be applied with a brush. The rationale being that even if the glaze material was not period the application method could be.
Complexity, Execution and Historicity
This project represents weeks of work and research as well as  my third work submitted in an Art and Science display and or competition. I have a personal interest in contributing work that shows a link from the Far East to continental Europe in the late medieval period and adding to the Society’s body of diverse cultures.
Additionally, I chose this piece for the aquatic life painted on it, the humor my summer students saw and the challenge of adding art on a 3d surface. I also enjoyed the challenge of working in new medium and the need for serious research prior to crafting. Although I have some experience with watercolor, mixed media and sketching outside of the SCA, I had never worked in clay before.
Before I could even begin this project I had to research clay, clay sculpting and methods for air-drying kaolin clay. I also researched period paints, cobalt paint and its production. I also researched the short lived Medici Porcelain factory and that Asian pottery was sought after in the late medieval person as a gift to people in positions of state as well as those of established means.
I created multiple clay blanks to finally, only have one dry and be painted successfully. However, more important to me was the feeling that I better understood the original cruet and had discovered a new interest in working with clay, ceramics and painting them.  Additionally, I found a way to make my love of research into the medieval connections between Europe and Asia into a tangible craft item.
Sources
“Cruet for Oil and Vinegar.” Museum of Fine Arts, Boston, 12 Apr. 2018, www.mfa.org/collections/object/cruet-for-oil-and-vinegar-58789.
“Cobalt” Wikipedia, Wikimedia Foundation, 24 Jan. 2018, en.wikipedia.org/wiki/cobalt.
“Kaolinite.” Wikipedia, Wikimedia Foundation, 26 Sept. 2018, en.wikipedia.org/wiki/Kaolinite.
McDowall, Carolyn, and Carolyn McDowall FRSA. “Pottery to Porcelain with the Medici.” The Culture Concept Circle, 20 Aug. 2012, www.thecultureconcept.com/pottery-to-porcelain-with-the-medici.
“Medici Porcelain.” Wikipedia, Wikimedia Foundation, 24 Jan. 2018, en.wikipedia.org/wiki/Medici_porcelain.
“Medici Porcelian Factory” The J. Paul Getty Museum http://www.getty.edu/art/collection/artists/1192/medici-porcelain-factory-italian-1575-
“Soft Porcelain vs. Hard Porcelain.” Whitehalls Auctioneers & Appraisers, 20 Feb. 2014, www.whitehallsauction.com/soft-porcelain-vs-hard-porcelain/.